Rod Page at iPhylo draws attention to a new paper in Systematic Biology (Costello et al 2011) estimating the total number of species. They come to a much lower figure than a previous paper (Camilo Mora et al 2011). Rod said something interesting that linked in to my thoughts on species numbers.

“The fuss over the number of bacteria and archaea seems to me to be largely a misunderstanding of how taxonomic databases count taxa. Databases like Catalogue of Life record described species, and most bacteria aren’t formally described because they can’t be cultured. Hence there will always be a disparity between the extent of diversity revealed by phylogenetics and by classical taxonomy.”

Even putting consideration of bacteria and archaea aside, use of population level DNA barcoding has revealed large numbers of cryptic species. These are often, as you might expect, among small dull-looking taxa where its hard to tell them apart by eye (although we do also find cryptic species in very well characterised groups such as birds, and mammals).

My feeling is that it is very rare indeed for the outputs of DNA barcoding to lead to formal descriptions of species. This is partly because those scientists do not have suitable training and partly because species description is a very difficult and frustrating task.

Remarkably, along only an 800 m transect, we detected 182 Nematoda OCTUs, compared with 450 species of Nematode that have been described from around the entire British Isles. From a geographical perspective, these data represent the discovery of 40% of the previously known phylum richness from a transect that represents 0.004% of the length of the British coastline (~17,820 km, Ordnance Survey). (Fonseca et al. 2010)

Yes we can argue about what is a species. Yes there can be problems with defining taxa by % sequence divergence alone. But really these would be fine-scale adjustments, its hard to get away from the fact that lots of lines of evidence suggest that there are a lot of undescribed species. Don’t forget that this isn’t DNA barcoding, this is species identification and discovery. Often when extensive geographic sampling is carried out on these small organisms they may additionally fall into cryptic species assemblies. So cryptic species complexes may be overlaid on top of this realisation that much/most biodiversity is undiscovered.

Will these species ever be described?

Will these species ever be described? No, they won’t. Almost none of these will ever be described formally, and yet they exist, they comprise a very important component of our ecosystems. This problem is not going to go away, and will likely get more evident with high throughput environmental sequencing. The approaches to estimating species numbers need to be more explicit (especially towards the press) about what they are actually counting. They are not counting species numbers, but the frequency with which people write up species descriptions, and I would argue that DNA barcoding and environmental sequencing remove any plausible correspondence between these two rates.

You could of course take the view that a species only exists when it has been formally described. I’m sure formal description is a good thing, but irrespective of their official status these species do exist, they do contribute to actual biodiversity, they do interact in networks, they do harm/help our soil, crops, livestock, and health. Unlike King Canute at some point we have to respond to the flood in a practical manner, and counting described species as if they were true estimates of species numbers is starting to look rather naive.

I don’t want to criticise these groups too much. I like anyone who has a go at species diversity estimation, and Camilo Mora et al in particular do look at links between described and actual species numbers, and it is always difficult to get the subtleties of your work over in the press. Its just that I am yet to really see this important difference come over in the reporting of this work, nor have I really seen many biologists (at coffee time, or the web) who see it. We are making the assumption that species description in birds and mammals represent ‘small beasties’, and that pre-molecular estimates are representative of post-molecular. Do you feel comfortable with those assumptions? I don’t really have new suggestions how we should estimate the true number of eukaryotic species on our planet, but we need to think much more broadly and critically about how we should estimate this. And don’t even get me started on the overlooked bacterial and achaean diversity…

Christopher Taylor at the excellent Catalogue of Organisms has a thought provoking post on the taxonomic diversity of described species. He has a picture of animal groups, plants and fungi scaled by number of described species. I like these sorts of pictures; they are great for shocking undergraduates who have never really thought about the diversity of life in a quantitative way before. But…. I am very skeptical indeed that described species numbers are even a reasonable approximation of actual numbers. Christopher mentions the “true diversity of organisms”. I am taking this a bit out of context, and he certainly mentions that this refers only to described species some of which will increase in future, but it reminded me of other summaries of life that I have seen and that in general biologists don’t critique enough our taxonomic sampling when describing biodiversity.

Described species are incredibly biased towards beasts that are easy for humans to study and describe (1). I know very little about fungi but it wouldn’t surprise me if fungi with large fruiting bodies are much better described than small soil mycorrhizal fungi. Mark Blaxter (2003) has an 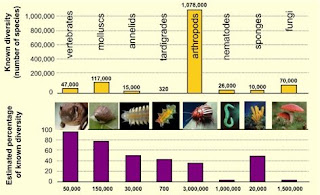 interesting figure of the known and estimated diversity of some animal groups in his article “Counting angels with DNA”. Africa Gómez beautifully redrew and modified this for a lecture on cryptic species and I’ve included her version here.

We shouldn’t lose sight that most species of animals and fungi are not yet described and that most of those are likely to be small, superficially dull-looking to your average human and members of less fashionable taxonomic groups (e.g. nematodes). [Africa's point was that these are also the criteria that seem to predict the presence of cryptic species complexes, increasing the level of our underestimates]

Lets consider marine nematodes. More than 50% of the planet is ocean abyss. In the abyss most animals are nematodes (estimates vary between 50 and 95% of animals by number, not mass) with approximately 100,000 nematodes/m2. Deep sea nematodes are not well described. They are difficult to get hold of and nematodes are surely difficult to study taxonomically anyway (I’ve always been very impressed by morphological nematode systematists, they have so little to work with). About a year ago I thought there were no deep-sea nematode sequences in GenBank, I might have missed them, but certainly not many. Would anybody like to guess how this would influence species numbers and global biodiversity estimates? It depends on levels of cosmopolitanism versus endemism of course, but these are not trivial numbers if we are trying to describe and quantify animal life!

OK I suppose my point is- should we trust described species as an estimate of total species? Do we have a large and unbiased sample of diversity on earth? If not does it matter? I would answer No, No, and definitely Yes!